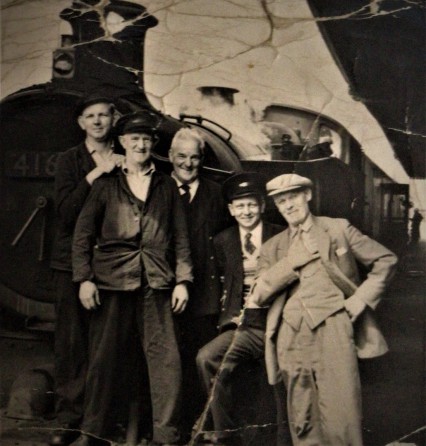 Nearly 60 years ago, near the end of 4160's working life on British Rail, driver Llewelyn Davies (second left with hat)  and Fireman Jack Davies (first left) and others were photographed at Aberdare Station(!) in front of 4160 about 1964.    This reflects a different era in the history of railways.   Llewelyn Davies was born in 1904 and lived in Aberaman and worked all his life on the railway.   He worked his way up to driver, and  retired when steam was made obsolete and he passed away in 1976 aged 72.  He gave 45 years of service to the railway and on his retirement was presented with a watch (pictured below).     He married Sarah and had 5 children.  Llewelyn's normal route was Aberdare to Pontypool Road and Severn Tunnel.     On the return trip from Pontypool with a goods train he would stop at Cwnbach Halt to pick up his daughter, pram plus grandchild and put them in the guards van and drop them off at Aberdare station.    His grandson Russel Jones supplied the photographs and this charming story, we hope that more information will be discovered about the others in the photograph. 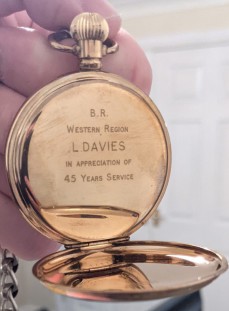 Hot on the heels of the news that the Llagnollen Railway in north wales has gone into receivership, the West Somerset Railway has appealed for 1 million pounds to fight for its survival.  The other damming news for the WSR this week, is that the Minehead level crossing will not be open until nearly the end of this year, this means that passenger carrying trains will not be able to come right into the Minehead station.  This is another hammer blow, to the future of the WSR.

The main support group, for the WSR is the West Somerset Railway Association, one  would have thought that the WSRA would  be financially supporting the survival, of the railway with every last penny they had.     Instead they still seem to be spending some more of their money and putting charity money  at risk,  on expensive London lawyers in litigation, against two Four One Six 0 Ltd directors for shares, they did not even have  title.    The case has now reached the mediation stage and is scheduled for late July.     If the mediation is successful for the WSRA, this will still add nearly another £20,000 to the already substantial  amount paid to their lawyers.     However, if mediation is not successful and the case proceeds to high court, the outlay will be astronomical for both parties.

If the WSR plc were to go into receivership due to lack of support, the line could  revert back to the local authority and then possibly be handed back or sold to the national rail network, then there could be no more steam on the West Somerset Railway ever again.

The board is pleased to advise its shareholders that we have at last manged to persuade the WSRA to enter into official mediation on the issue of the disputed shares, this we hope will prevent further wastage of valuable funds on both sides.   Our first offer of a solution to the issue was dismissed out of hand by the WSRA.     Mediation is not as costly as a court case being in the region of £4,000 to each party, which will still bring the total amount so far spent by the WSRA to approximately £35,000.    However, if it were to fail and proceeded to court the new costing are in the region of £140,000 to £160,000 total costs for the losing side.What has to be remembered, that even if this is settled in Mediation and this not certain that will happen the WSRA will still have to pay £14,128  back to the two directors of Four One Six O Ltd for the shares to be released,this will bring the total account for the WSRA to nearly £50,000, is it not the time to stop this legal obession by the  WSRA

The irony of this whole debacle is that 4160 could still run on the WSR in the future.     The board of 4160 signed a lease contract earlier this year with the 5542 Group and South Devon Railway to complete the current heavy over haul .     The lease runs for 13 years and enables the leaseholders to hire out the engine to any heritage railway, so there is no reason whatsoever why 4160 could not run back on the WSR with an agreed contract from the 5542 Group.

This makes the current litigation situation, rather unnecessary. 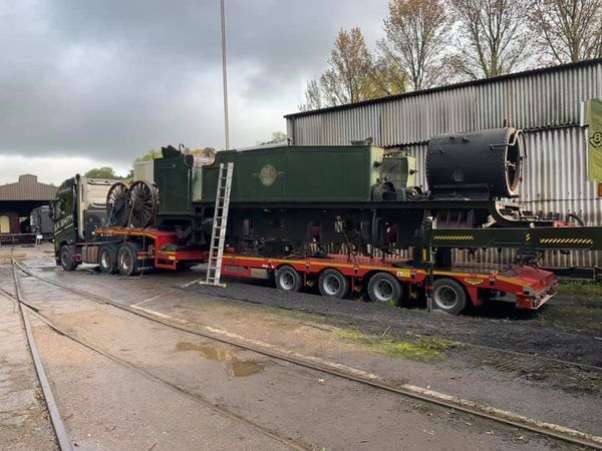 The locomotive 4160 was moved from Llangollen Railway workshop to the South Devon Railway at Buckfastleigh to complete her rebuild.    The removal crew was headed up by Ray Lee and Paul Johnson, both 4160 directors and helped by John Hasker and  Mick Prior both shareholders also Ray's brother Andrew Lee of R&A Commercials, driver "Bubbles" from Brett Ellacott Haulage and driver "Metal" from SM Smith Haulage .     They did a fantastic job of locating all the components in not the most ideal conditions and getting them safely loaded onto the transport assisted by the staff of Llangollen works.   On arrival at Buckfastleigh there was a crew of 8 volunteers and staff ready to unload and store all the components, they all did an expert job and I would like to thank them for their assistance.

The 5542 Group will now be custodians of 4160 for the next 13 years.  We look forward to our association  with 5542 and SDR to help preserve this popular locomotive.

The very transparent and open WSRA have failed to answer a question from one of their long standing members.  The question asked was  "How much money has the WSRA spent on litigation to date on the claim against the two Four One Six 0 Directors?” Three   months later Terry Morgan is still waiting for an answer from Mike Sherwood!

Unfortunately the situation has not changed; the aims of the WSRA are still the same.     When the ex WSRA chairman, Paul Whitehouse, contacted our contractors at Llangollen Railway late last year, he stated in writing that if they were successful in winning the court case "they would take over substantial control of the company" (see documents section on this web site).   This was a hostile act targeting the company Four One Six O Ltd and was directly interfering in the running of the company.  The WSRA has never had control over Four One Six O Ltd which has always been an independent company.    In my nearly 30 years as serving as a director I have never witnessed this type of control or interference over the company before.   This has now become a company matter and therefore we must act in the best interests of the company to protect the locomotive.

Whitehouse’s contact with our contractor was highly irregular, but it did confirm the board’s suspicions that this whole saga was never about the sale of the association shares.   It was a ruse to try and remove the two directors who opposed WSRA views.       A serving WSRA trustee, Robin White, who has played a major role in this litigation from the start, made a public statement declaring "the two directors were tainted" and went on to suggest they should be removed.    In the process it is estimated that the sum of £30,000 has been spent on legal fees to date by the WSRA which is membership money.

The fiasco regarding the sale of the promotions side of WSRA to the WSR plc is disastrous and just illustrates the fate that could have befallen the locomotive If Whites influence had been allowed to persist.   They could have gained control of the company and the locomotive; it would have been their next casualty and sold off to the plc.   With the mess the railway is in at the moment, the board’s overriding concern was for the locomotive to be safe and away from the toxic environment that exists on the West Somerset Railway today.    The board really had very little choice in the matter.

The other more practical consideration is the West Somerset Railway is in deep financial trouble, and they could potentially default on hire fees.   It would seem that the WSRA are trying to force the company to run the locomotive on the WSR, and because we refused to do their bidding Paul Johnson and I are being taken to court.   It really does make you wonder what type of people they really are.

NOTICE TO ALL SHAREHOLDERS

Please make sure you are not a ‘lost’ shareholder.  If you have moved or changed your telephone or email address please would you advise us of your new contact details on info@4160ltd.com or write to the Company Secretary at our registered office.     In the case of a deceased estate the shares must be re-registered in the name of the new beneficiary by the Company before they are valid.

On 25th May 2018 new legislation comes into force and we as a company need to obtain permission from all our shareholders to retain their contact details in order to write or email them about company matters.    It is essential that you contact us as soon as possible at info@4160ltd.com and advise us that you wish to “OPT IN” to receiving information also giving us your full name and address.