The Board of Directors would like to correct  a factually inaccurate statement made by the current Chairman of the WSRA in the latest Association Journal where he stated that the alleged Association Shares carried double voting rights.     These shares do not have double voting rights, as stated in our Articles of Association, Section 3 a) “a holder of Association Shares shall have one vote for each Association Share”.     This is also stated on the 4160 Ltd page at Companies House.   It was also inferred in the Chairman’s report that the Association shares were gifted to the WSRA, this is not the case.   These shares were purchased by the unincorporated Association which was wound-up prior to the company named WSRA and the WSRA charity being formed and registered.

4160 Ltd Articles of Association were written in October 1991, three years before the WSRA Company and Charity were created, therefore, these articles to not refer to the current company or charity as it stands today but only refer to the disbanded unincorporated Association.     In company law the current Association do not have title to the Association shares as they did not exist when the shares were first purchased.    The members who ran the unincorporated WSRA omitted to transfer on a Stock Transfer Form, as company law requires, the shares to the new WSRA Company or Charity.

It is important to be fully aware of the legal details as outlined above in order to understand the complexity of the situation.    Any statement needs to be accurate otherwise the facts disappear into fiction.

Since our last posting we have been approached by a considerable number of 4160 shareholders and association members asking for clarification as to exactly why the WSRA did not have title to Four One Six O Ltd shares.  Below are statements sent to the WSRA’s lawyers that sets out exactly why, in company law, they  did not have title to the shares.

“It is clear that it has never had any legal title to the Association Shares as they were all allotted before WSRA came into existence, and (leaving aside for the moment the legal position, which is that an unincorporated association cannot own shares in its own name as it has no legal personality) no stock transfer form has ever been received by 4160 transferring the Association Shares from the now wound-up unincorporated West Somerset Railway Association (UWSR) to WSRA.   Please explain, with reference to the law, how it is that you believe the WSRA became a member of 4160 in respect of the Association Shares.   Shares are transferred on stock transfer forms, not by resolutions of committees of unincorporated associations.   In this regard we refer you to s770 of the Companies Act 2006.   The status quo ante is not as your client wishes to represent it.

If a representative of UWSR were to seek rectification of the register of members of 4160 vesting the Association Shares in a member of UWSR as trustee for UWSR, that would fail, given that the object of the trust (i.e. the members of UWSR) no longer exist.   If the beneficiary were to be WSRA, the provisions of Article 22.b) ii) would not apply and the necessary certificate could not be given as there would have been a change in beneficial ownership.   In any event, as UWSR was wound up in 1995, it is difficult to see how anyone can have the authority to seek such a rectification on behalf of a group of non-existent beneficiaries.   We do not see that there is any conceivable basis for WSRA making an application of rectification of the register in its own favour as it has no absolute right to be registered as a member of 4160.   That registration is subject to the discretion of the board of 4160 under Article 23.

Even if that hurdle could be overcome and a successful application for rectification were to be made, WSRA will then have to request the resultant trustee for UWSR in respect of the Association Shares to transfer them to WSRA.   The transfer would, of course, be governed by the articles of association of 4160.   Because the transfer would be to someone other than another trustee for UWSR (because WSRA is not the same as UWSR), it would be up to the board of 4160 to decide whether or not to register WSRA as a member of  4160, in respect of the Association Shares, again under Article 23.   There are no circumstances at all in which a certificate as required by Article 22 b) ii) could be given as, on your own argument, the Association Shares were originally held (by whom it is unclear) for the benefit of UWSR and your client wishes the beneficial ownership to be transferred to WSRA, a different beneficial owner.”

Paul Whitehouse, in his recent article in the WSRA journal, has not mentioned anything regarding the lack of title to these shares.    This new aspect is very important. We are somewhat surprised that the WSRA’s experienced London lawyers and their own in house legal Trustee did not check the facts, with reference to title, prior to embarking on expensive litigation.

However, we would like to set the record straight on other matters raised in the article.   We do not disagree that the group calling themselves the  WSRA (prior to it becoming a charity and therefore unincorporated) helped 4160 come into traffic but prior to this a lot of work had been done and a lot of money invested by the Plymouth based shareholders and others around the country.   In the heritage railway world many locomotives have been brought into traffic by agencies, societies and associations, they move around in the heritage railway world without problems.    This particular verbal arrangement between the unincorporated  WSRA and Four One Six 0 ltd was originally negotiated by Chris Dowrick nearly 30 years ago.   The terms were that the unincorporated WSRA was to help the locomotive get into traffic and in return it would run for 10 years on the West Somerset Railway.   In fact, it ran for 20 years, 10 years over the original agreed time.     The reason we know this is because Paul Johnson was a Director and Mike Crees was alternate Chairman around this time to the late Malcom Rowe.   The current Chairman of the WSRA (the charity)  has no knowledge of these arrangements as he was not involved with the railway at this time.

The locomotive would have run for a third 10 year contract on the WSR if Mike Crees and Paul Johnson had not been the subject of abusive, defamatory and totally incorrect statements made by WSRA Trustees in public.

Leaving aside the unhealthy relationship with the WSRA, no board of any company would consider making a long term contractual arrangement with the WSR Plc whilst it is going through very serious financial problems and at worst they will have to file for bankrupcy.

4160’s success as a company is down to the fact that we have a business plan that looks 10 year ahead, so from the start of a contract the locomotive has to earn money for the next heavy overhaul and this mean placing it with a financially viable operator.

Information has very recently come to light that the current WSRA (the Charity) actually had no legal title to the “Association shares” whatsoever according to company law!  Also the unincorporated WSRA mentioned in the Four One Six 0 Ltd Articles of Association is not the same WSRA (the Charity) that operates today.   These Articles were written before the Charity was registered so as far as the law is concerned they are two different entities that just happen to have the same name.

Hornby are about to reproduce 4160 in 00 gauge and will be available in October this year.   We look forward to seeing it available to the public and hope that it’s not as expensive to maintain as the real thing. 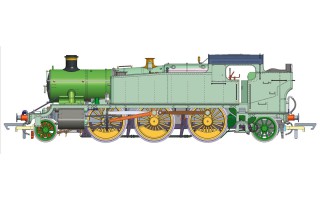